The Primavera socks are officially (and finally) done! 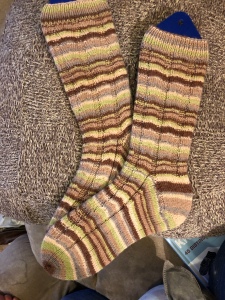 It feels like I’ve been knitting on these things forever, which isn’t too far off, since it took me about seven months to get them completed.

Overall, they turned out fine. I’m not wowed by them or anything, but there isn’t really anything wrong with them.

I’ve already cast on for my next pair of socks. I’ve decided to knit Firestarter, which has been on my Ravelry Queue forever. I decided to use some of the yarn I picked up a few weeks ago on my way home from an audit. It is Sock It To Me by Hearthside Fibers. The colorway is splashes of yellow, red, and orange on a white base. It seemed fitting for the pattern name.

So far, I am only a couple of pattern repeats into the foot of the first sock, so it is hard to say how happy I am with the pattern/yarn combination.