I love cooking and baking. And it is one of those things that I like to share with Kiddo. So when, back in July, I came across foodstirs and their baking kit subscription service, I decided to give it a try.

Every other month, the send a themed baking kit, with organic mixes and all natural decorations. The first kit we received was for August, and it contained the mixes to make Campfire S’more Brownie Cupcakes along a frosting bag and cupcake liners. Of course, being me, I set it in the pantry and it sat there.

Since it was Labor Day, Husband and I were home with Kiddo on Monday. I was dicing apples to make some slow cooker apple butter (which, by the way, yum!). Kiddo, of course, wanted to help and that made me remember the cupcake kit in the pantry.

We unpacked it and got to work (I should have taken a picture of the it, but I didn’t think about it — maybe next time)!  We did need to supply a couple of things, such as oil, butter, milk, eggs, and yogurt, but they were all things that I had on hand.

The directions were clear and easy to follow, with pictures for each step. It didn’t take Kiddo and I long at all to get the cupcakes in the oven.  The next step, adding the marshmallows to the top of the cupcake and browning those, was a bit trickier. My marshmallows wanted to slide off of the cupcakes. We got it done, but it didn’t look nearly as pretty as the pictures. 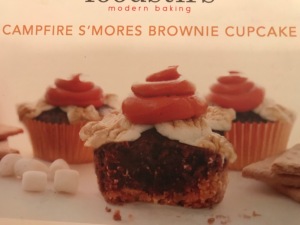 The very pretty pictures included with the instructions.

Once the cupcakes had cooled, the final step was the frosting. It mixed up easy enough, but even after chilling it the suggested time, it was pretty runny. It dripped off of the cupcakes in some spots. It may have been related to the graham cracker crust.

At the end of the process, there seemed to be quite a bit of oily residue on the cupcake pan and the wrappers, I’m not sure what happened there, but the cupcakes themselves didn’t seem overly greasy. 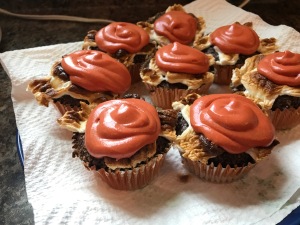 Overall, while mine didn’t turn out nearly as well as the pictures, I was pretty happy with my first foodstirs box. It looks like October’s box is going to be Monster Cupcakes, which look super adorable.

Join 23 other followers
Follow The Right to Bear Yarns on WordPress.com