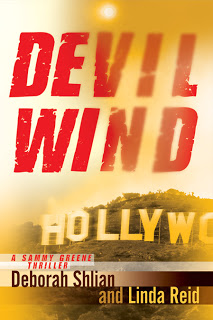 
This is another book I received via Book Rooster in order to review it.


Devil Wind takes place in Los Angles, in December 1999. The Santa Ana winds are pushing wildfires closer and closer to the city, adding to the chaos and stress caused by the fears of the looming possibility  of a Y2K disaster. Progressive late night radio talk show host Sammy Greene is new to LA, having moved from the East Coast. In her quest to draw attention to the forgotten people of the city, she finds herself caught up in a web of murder, terrorist plots, and her own past.
This book had the potential to be a great thriller; but the authors included way too many elements commonly found in thriller novels, murder, spies, terrorism, medical drama, wildfires, prostitution, theft, estranged love ones, the list goes on and on. The giant pile plethora of elements adds to the confusion already caused by the story’s frequent jumps between characters and constant introduction of new plot twists and stories. It makes the story both unbelievable and hard to follow.

The core story line was interesting enough, and most of the characters were likable. I really thought that the book had potential, but ended up disappointed. It was one of those books where I had lost all interest by mid book, but plodded on through to the end of the story, where everything seemed to be wrapped up a little too neatly.
The bottom line:
When I read the description, I thought I would like the book, but so many of the added elements and coincidences were so unbelievable that I was tired of the book by the time I was halfway through. By the end of the book, I was resenting it for wasting my time, though admittedly, that was more my own fault for my determination to finish a book I didn’t like.


P.S. I have absolutely no idea what is up with the text/background color on this post. We’ll just call it a tech fail and move on.

← Book Review: The Imitation of Patsy Burke
Back to Work →