The Mythos Cardigan is finally knitted, off of the needles, blocked, grafted together, i-cord applied, and blocked again! In other words: It is finally finished!

The sweater was intended to be a quick little knit, and a perfect little cardigan for chilly summer nights. It never intended to be a warm cardigan for late fall wear. But the cardigan somehow took five months to complete and I now have a charming little summer sweater all ready to wear in late October in Wisconsin. Sigh, the best laid plans.

However, it is still a cute little summer sweater, and I’m pretty happy with how it turned out. Mostly, I was impressed that it could go  two shapeless pieces of fabric, neither one remotely resembling an article of clothing (ok, husband said it kind of looked like a giant thong), into a perfectly wearable sweater.

In other words, it transformed from two of these: 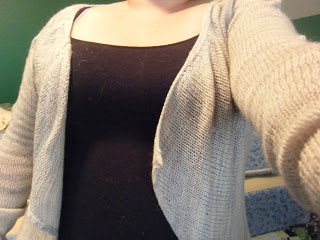 The pictures of me wearing the sweater aren’t the greatest, but keep in mind that they are pictures of me taken by me (and I had no make up on and hadn’t done anything with my hair, thus the cutting off at the neck).

Most non-knitters, and some knitters don’t realize the amount of work that can go into a finished piece of clothing even after the main part of the knitting is done.

The first step in the process of finishing most freshly knit goods is a nice soak in warm water and wool wash. I usually use Soak Wash, which requires no rinsing and smells absolutely wonderful. I’m also a fan of Kookaburra Wool Wash as well. This particular sweater got a bath in Kookaburra.

Then I drain the sink, letting gravity do the first part of the water removal. Wool can soak up a lot of water, and can take a long time to dry, so it is best to try to get as much water out of it as possible to speed up drying time.

Then you wrap each piece in a bath towel, carefully rolling up the towel. I usually walk across the towel a couple of times to squeeze some more water out of it. After that both towels go into the washing machine and ran through the spin cycle. 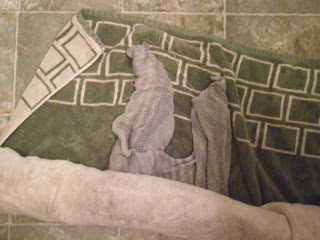 Yes, I know you don’t usually throw hand knit goods into the washing machine (at least I don’t). But that is why they are wrapped up in a towel and run through for only the spin cycle.

After the bath, it is time to block the sweater. Usually this is only done with natural fibers, as blocking acrylic doesn’t really work all that well. The method used for this sweater is called wet blocking, because you pin it out when the knitted pieces are still wet and let them dry that way (creative name, right?). There are other methods of blocking, but wet blocking is usually what I use whenever the knit fabric will allow.

Blocking involves pinning the pieces out to the correct measurements. So I headed upstairs with a bowl full of rust proof pins, some towels, a tape measure, and the sweater schematics from the pattern.﻿﻿﻿﻿﻿﻿﻿﻿
I decided to pin the pieces out on towels laying onto of a mattress. This method works pretty well for larger pieces. It is nice because you can just stick the pins straight into the mattress. I also have blocking mats, but those work better for smaller piece. This sweater was pretty lightweight, and the pieces were symmetrical, so I just pinned them right on top of each other (this would never work for a heavier sweater, it would take forever to dry).

Once all pinned out, it was time to let the sweater dry. Minerva, being ever helpful, decided to supervise the drying process. Perhaps she felt that being named after the Roman goddess of weaving also gave her responsibility when it came to knitting. Also, cats, mine at least, love to help with the entire knitting process.
After the pieces were dry, it was time to start the assembly of the sweater. First I sewed the sleeve and side seams. Seaming always seems to require stretching and squishing the pieces to get them to match up. I don’t like poking sharp pins into the pieces to hold them, but I’ve discovered that bobby pins actually work beautifully. They clip the pieces together without damaging the fabric and are easy to put on and take off. So I pinned and sewed the side seams and sleeve seams. I wouldn’t usually post a picture of sweater pieces pinned together, but I am pretty proud of my new use for bobby pins (yup, just like MacGyver).

Then came the back seam. This pattern called for leaving the back stitches live, and grafting them together using a method called the Kitchener stitch. I’ve used the Kitchener stitch for the toes of socks before, but never on this scale. The first part of the back looks a little wonky, but by the end I was pretty good at it. Then, I used applied I-cord to add trim around the neck. Applied I-cord is tedious, but gives a very nice edge. I whip stitched the bottom hem, and the piece was ready to block again.

So, the piece went back into the sink, was wrapped in a towel, and took another spin in the washing machine. Then it went back upstairs to the mattress. Thankfully, it looked a lot more like a cardigan when I pinned it out this time. 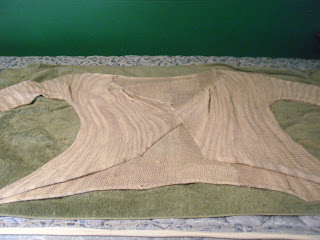 Again, I left it to dry overnight. In the morning, I came back for it, shooed the cat off of it (Bode this time, not Minerva), unpinned it. There was nothing left to do but try it on, and attempt to take some pictures.

The sweater was knit out of Stroll Tonal from Knit Picks. The colorway is called Pearlescent. It combines shades of ivory, light grey, and medium grey as well as some light shades of platinum and silver. It is actually a pretty combination of neutral grey tones with some warm undertones. In some light, it appears to have some hints of a pinkish undertones, but in other light seems to be purely grey tones. It is a hard color to accurately capture on camera. In my opinion, the color is closest in the picture where Minerva is sitting on the sweater pieces or in this last picture.

All in all it turned out pretty cute. I’m excited for next Spring to roll around so I can actually wear it outside of the house.